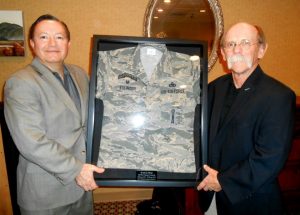 John Eslinger is a renaissance man; he did two tours of duty in Vietnam but was never a member of the military (fill in the blanks). He is a successful entrepreneur, actor and movie producer.

Chief Hoover could be called the “Chief out of Central Casting”. He had 13 combat deployments over his three decades of service. Eslinger knew Chief Hoover’s family when he was a baby and their paths crossed again decades later at Davis-Monthan Air Force Base.