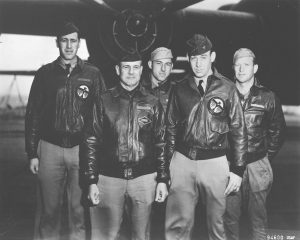 On April 18, 1942 sixteen B-25 bombers launched off the deck of the USS Hornet destined for Tokyo.  This “one way” mission later became known as the “Doolittle Raid” and was a huge morale boost to a nation still reeling from the Japanese surprise attack on Pearl Harbor.

80 men from all walks of life volunteered with only the knowledge that it would be a “dangerous secret mission”.  B-25B Mitchell Bombers were specially modified in order to extend the range necessary for the mission. Some of these modifications included removal of the lower gun turret and replacing the rear guns with broom sticks painted black.

The original plan called for the bombers to land in China. However, an encounter with Japanese picket ships forced the crews to launch 170 nautical miles further from Japan that planned. It truly became a one way mission.

Lt. Colonel Richard Cole co-piloted the first bomber to take off – seated next to mission leader Lt. Colonel James Doolittle. In his interview he describes flying a bomber only 200 feet above stormy seas as if he were walking down to the corner grocery. His crew was forced to bail out over China. Cole spent his first night in the tree where his parachute deposited him. Of the original 80 crew members, 69 escaped capture or death.

Doolittle first considered the mission a failure and was certain he would face a courts martial upon his return to the US. Instead the Raiders were hailed as national heroes.

The silver goblets used in the now legendary Doolittle Raiders toast were donated by the citizens of Tucson.